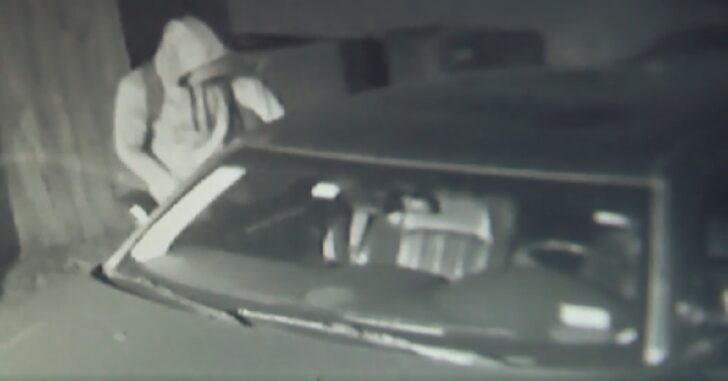 HARRIS COUNTY, TX — A punk kid trying to make some easy money breaking into some cars in a Texas residential neighborhood is extremely lucky to have survived his interaction with an angry armed homeowner, ABC 13 reports.

The kid, who had reportedly broken into the resident’s garage, managed to get himself shot in the head but only grazed.

Deputies tell Eyewitness News a motion sensor light went off in the resident’s home on Park Valley around 12:45 a.m. Friday.
That’s when the man, who was home with his wife, grabbed a pistol and went to investigate.

He discovered the masked suspect in the garage who allegedly started to come toward him. Authorities say the homeowner shot him in the head. The bullet grazed the suspect, who ran away. Minutes before the suspect was shot, surveillance video from the next-door neighbor’s camera shows him looking into cars.

“When he saw the alarms, he did not try to get in. He just went to the next house, just happened to been the wrong one,” said neighbor James Sprague.

Sprague says his wife heard a gunshot minutes later. He then saw the suspect come back into their driveway. The suspect is captured on video looking for a place to hide behind an air conditioning unit at Sprague’s home. This time, Sprague was in his own front yard ready with his gun.

“She woke me up, and I came out with my gun, and I was going to put another one in him, but I did not see him,” Sprague told ABC13.

The 19-year-old was found a short time later about a block away from the home. He was taken into custody. He’s expected to survive.

Sprague, for the record, is very, very lucky he didn’t see this idiot kid hiding out behind an AC unit, trying to get away from the gunfire.

That’s not shooting at a threat. The kid had already lost and is going to jail. For one night, that’s enough.