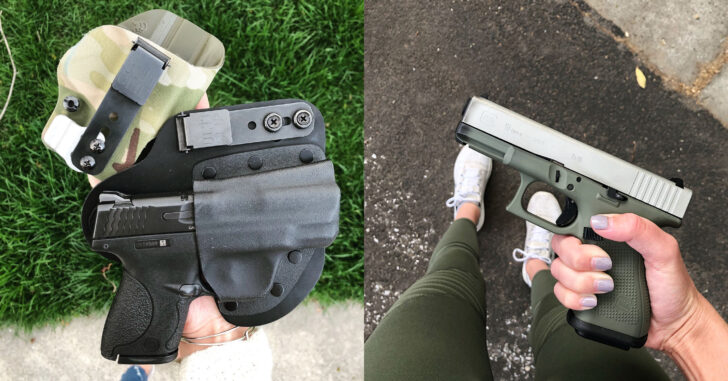 In the spring of 2017, I was still in high school and visiting my older brother in Utah when I saw on the news that a bill passed allowing 18 year olds to obtain concealed carry permits. I was already accepted in to the same university that my brother attended and had plans in motion for living off campus. I thought that issuing provisional permits for younger people was a great idea, but I never expected that 6 months later, I would be applying for one.

If you missed Part 1 of this series which covers my introduction to firearms and concealed carry, you can read it here.

The summer before I left for college, there was a minor incident that really made me want to be more in control of my own safety. I was at a Starbucks in the middle of the day, waiting for my iced latte, when a man approached me. He was probably in his 40s and told me that I was “the most beautiful he had ever seen”. I had no idea what to do so I just said, “thanks…” and went back to looking at my phone. He left, but came back a minute later and put his business card on the table in front of me. An older woman saw the whole incident and asked me if I was okay. She watched out the window and let me know when he left the parking lot so I could walk to my car. After I made it home safely, I remembered the new law in Utah. I decided that once I moved there, I was going to get my concealed carry permit.

#whyicarry I am a young woman who spends most of her time on a college campus, and I refuse to be a victim. #concealedcarry #ccw #edc #girlswhocarry #girlswhoshoot #guns #gungirl #smithandwesson #mpshield #9mm #crossbreedholsters #2a

After being issued my permit, I was gifted a 9mm M&P Shield to use as my carry gun. I was slacking on making a holster decision when I had another wake-up call. One night, I received a series of campus alert texts notifying me that there were shots fired near campus. My housemates and I spent most of the night switching between news channels to learn that a student from our university was murdered near campus. I immediately felt more motivated to carry my gun. I also made a promise to myself to change my mindset. I needed to make sure to pay more attention to my surroundings and critically assess every situation. I no longer just mindlessly scroll through social media on my phone when in public. Being from California, everyone in Utah seemed so friendly. Unfortunately, that is not always the case. There are going to be threats to your safety, no matter where you live.

A “business casual” outfit for my capstone project symposium today. The CrossBreed modular belly band was perfect for this outfit because my dress pants had a super flimsy waist and no belt loops • • • #concealedcarry #ccw #edc #ccwfashion #girlswhocarry #girlswhoshoot #guns #gungirl #smithandwesson #mpshield #9mm #crossbreedholsters #2a

In California, concealed carry permits are issued at the discretion of your county sheriff, and have burdensome requirements compared to the permits in Utah. In the county I grew up in, it is virtually impossible to get a permit, even with the proper qualifications. There is also no provisional option offered in California, so you must be at least 21 to obtain a permit. I am so grateful that I go to college in Utah where I am able to carry tools to defend myself, even at 19 years old. Part of why I have my Instagram, @freedom.concealed, is to encourage other young women to do the same. The next article in my series will focus on training and the future plans for Freedom Concealed.