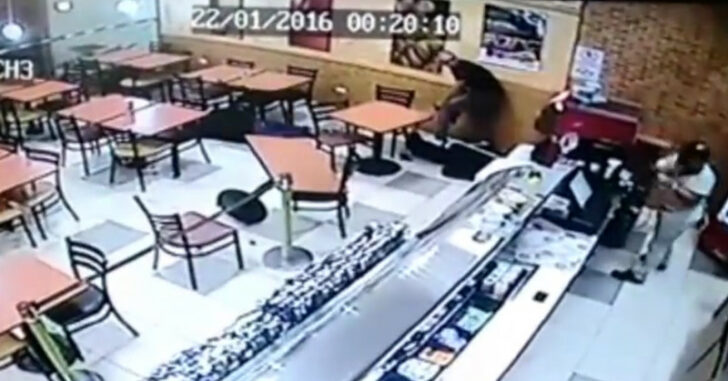 Stopping in to grab a bite to eat, an off-duty police officer was caught off guard when two armed robbers entered a sandwich shop.  Thankfully, this officer was smart enough to keep it calm and steady until he had the upper hand.

There’s a lot to good, simple technique when it comes to drawing from a concealed carry holster and pinning down not one but two armed bad guys.  This is what training can get you, folks — and why it’s something we constantly promote.

In this video, we see him act nonchalantly and play the part of “deer in the headlights” customer until he’s able to get both of the bad guys into one direction.  That’s something that’s difficult to do — and there probably was a little bit of “flying by the seat of one’s pants”.  That’s difference between good training and happenstance, though.  When you dedicate serious time to training with your concealed carry handgun, reinforce proper techniques and situational awareness, even the happenstance moments have a greater chance of lining up in your favor.

Definitely a high-five goes out to this guy.  He managed to subdue both attackers and possibly saved lives in the process.  More importantly, he was able to get them all put into a corner and on the floor before anything bad could happen.  That’s some quick thinking!

Previous article: Crime DOES Pay! Washington D.C. To Begin Paying Criminals NOT To Be Criminals. Note: This Is Not Satire Next article: Teens Kick In Front Door Of Home, Homeowner Responds With Gun Shots