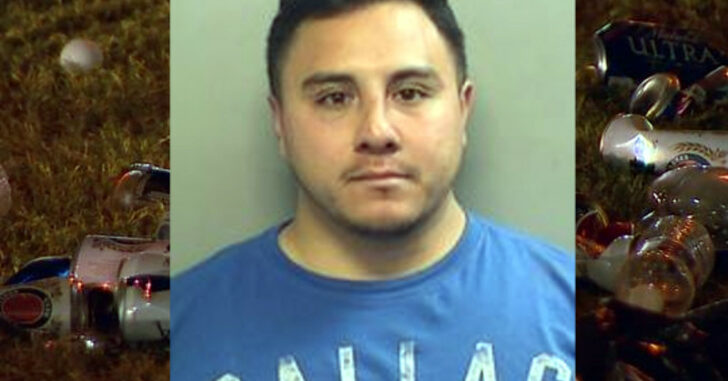 ARLINGTON, TEXAS — Big ole’ surprise.  We all know the type.  He had one too many beers and he didn’t handle it well.  It’s a tailgating party.  People talk smack back and forth.  Sometimes there’s a less-than-gentlemanly game of fist-o-cuffs.  But in 99.9999% of cases, tailgating hostilities end there.  And then there’s this ****head makes it go way out of control.  Unfortunately, that’s precisely what happened outside the AT&T Stadium after a game between the New England Patriots and the Dallas Cowboys.

First off — there’s never a reason to spill blood over the Patriots.

After two dozen or so beers, apparently tensions got heated.  KHOU reported that 28-year-old Martin “I’m an asshat” Rodriguez got into a brief verbal altercation with a 27-year-old.  Obviously not winning, he pulled his gun.  The 27-year-old wisely walked away.  When you see someone reach into their bag of crazy and a gun is involved, it’s always best to back up and get some distance.

The problem is that up until that exact moment, Martin Rodriguez was a law-abiding gunowner.  Actually, let’s rewind.  Rodriguez stopped being legal after getting half in the wrapper.  It’s a pretty safe bet that, with a gun, he felt like no one could challenge his aggression.  His argument wins every time because he has a gun, right?  And when he drew it on a 27-year-old who happened to think he was full of detritus, he didn’t take well enough alone.

Getting no relief from picking one fight, he tried to pick another fight with someone else.

And that’s when Richard Sells, 43, stepped in to be the voice of reason after a long night of festivities.  He stepped between Rodriguez and the other tailgater.  For his efforts, Rodriguez shot him in the neck at close range.

Because Rodriguez is an ***hole.

Guns don’t make people good or bad.  Some people have them.  Some people have bad judgement.  Some people literally just shouldn’t have them.  And those people kill people because they don’t leave well enough alone.  On behalf of responsible gunowners of America, **** Martin Rodriguez.  **** any of his friends who didn’t jump in to corral him when his behavior got out of control.  They knew he had a few too many.  And anyone that would shoot a man in the neck at close range after he tries to bring peace to a stupid, stupid altercation is the worst type of person.  I hope the book gets thrown at this guy.

No.  We’re not spinning this.  Rodriguez is an ***hole.  And he’ll live with murdering a completely innocent man in cold blood.

Previous article: [VIDEO] Scan And Assess After A Defensive Shooting - Is It Necessary? Next article: Utah Schools Prohibited From Asking Teachers If They Carry Concealed -- With Stipulations...