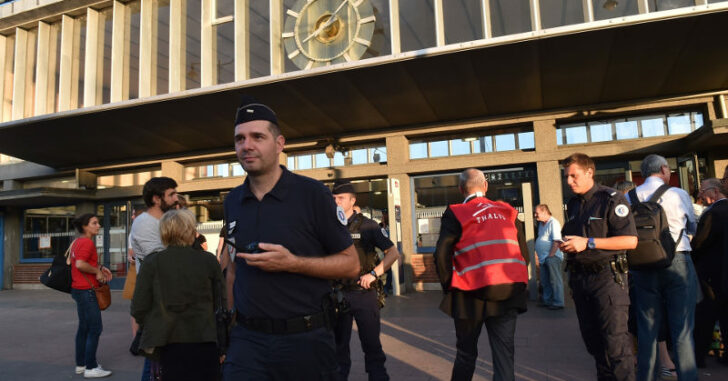 ARRAS, FRANCE — News is still developing over a recent shooting incident which happened on a train from Paris to Amsterdam.  Two United States Marines were able to subdue and capture a gunman loading an AK-47 in the toilet of one of the train cars.  One Marine was reportedly struck by gunfire and the other stabbed but both managed to wrestle and subdue the attacker before authorities could arrive.

The Guardian is presently reporting that French anti-terror police have taken over the investigation which purportedly was originated by a 26-year-old Moroccan.  The attacker’s identity is still being verified because he did not have any identification papers on him at the time of capture.

The only reason police know the attacker’s nationality was because he informed them.

Both Marines were seriously injured in the attack – one sustaining grievous gunshot wounds.  According to the Telegraph, the total count of the victims is three – including the two U.S. Marines.

According to the Telegraph, the office of the President of France released this statement:

The President of the Republic is being kept informed in the aftermath of the attack carried out on the Amsterdam – Paris train.

Three people have been injured and two of them are in a critical condition. They are being attended to by emergency services.

The aggressor, who has not yet been identified, was arrested at Arras train station, where the interior minister will be shortly.

Everything is being done to shed some light on this drama and gain as much as much information about it as possible.

The President of the Republic offers his solidarity to those injured and to their loves ones.

Details are still emerging but it appears the incident took place in the rear of the train and pictures from the scene show blood stains and quite a number of AK-47 magazines being recovered by authorities.

Previous article: The Well Armed Woman Introduces Industry's First Women's Only Online Gun Forum And Community Next article: Minnesota Says GFY To 4 States In A Move To No Longer Recognize Their Carry Permits, Including Utah