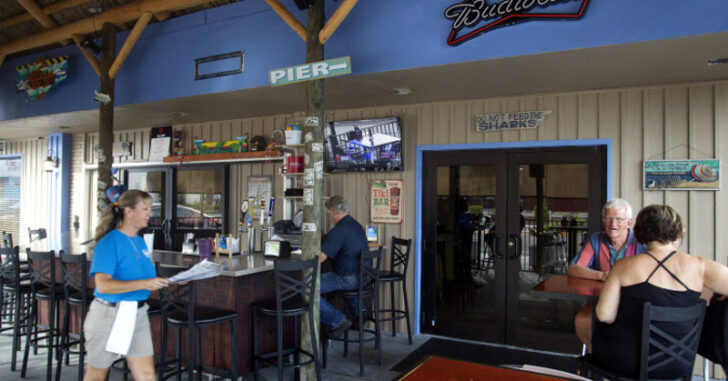 After a nice meal at the Shell on Fowler Avenue, a couple were leaving when two teenagers emerged from the bushes brandishing what was thought to be an actual gun.  The two teens – identified now as Reginald Smith and Jeremiah Walker – demanded the couple’s money and cell phones.

According to Fox 13, the couple surrendered over their money and cell phones without any struggle.

As the woman began to flee back towards the restaurant, one of the teens purportedly pointed the gun in her direction.  That’s when the concealed carrier drew his firearm and fired.  That bullet hit Smith in the shin.

The teens, holding a fake gun and realizing they didn’t have a leg to stand on, immediately attempted to flee.  That is when Smith realized he was hit.  That didn’t stop Reginald Walker from abandoning his comrade, leaving Smith alone.

“Our suspect who was shot was shot in the left shin and he will be okay. He is expected to recover,” said Tampa Police Lt. Michael Stout in an official statement.

Both the money and cell phones were successfully recovered because both bandits dropped what they were holding when they went to flee.

Police have acknowledged that the gun they were using was a fake plastic replica with the orange safety removed – truly a dangerous move.

Never Bring a Fake Gun to a Gun Fight

What this concealed carrier did is certainly the path of least resistance.  When the two teens had the drop on him and his significant other, he gave into their demands for money and phones.

Just like a similar situation in Charlotte, NC, where a man robbed a convenience store with a fake plastic gun.  He obviously made it look like a real one.  But for concealed carriers, when a live situation is unfolding, it’s difficult to ascertain whether it’s a true gun one is facing or a fake one.  The best policy is treat every weapon as a real one.  If the criminal is dumb enough to draw, he’s dumb enough to keep the consequences.

The concealed carrier, in this case, was probably hoping that if the muggers got what they came for, they would leave.  No violence necessary.  It was only until his significant other – after being mugged – ran for the safety of the restaurant that Smith, one of the muggers, made his second slip-up for the evening.  He turned his toy gun away from the concealed carrier and onto the fleeing woman.

In a real threat environment, Smith left that concealed carrier with no choice but to act.

Mugging people is a dangerous criminal enterprise.  Mugging strangers with a fake gun is arguably insane.  And in the case of the Tampa courts, once apprehended – both teens will likely be charged as men and charged with armed robbery.

The concealed carrier – his name withheld by request – did the responsible thing.  And thankfully, both criminals were caught and get to live another day – hopefully to learn an important lesson that could have ended much, much worse.

Note to bad guys:  You never know who is legally carrying in Florida.  Best be quick about your business or pick another line of work.  But, if you’re not going to heed either, please DO keep bringing plastic guns to a gun fight.

Previous article: Loaded Gun Left In Rental Car By Concealed Carrier, Later Found By 6-Year-Old Next article: Do You Need Your CCW Permit On You While Carrying?