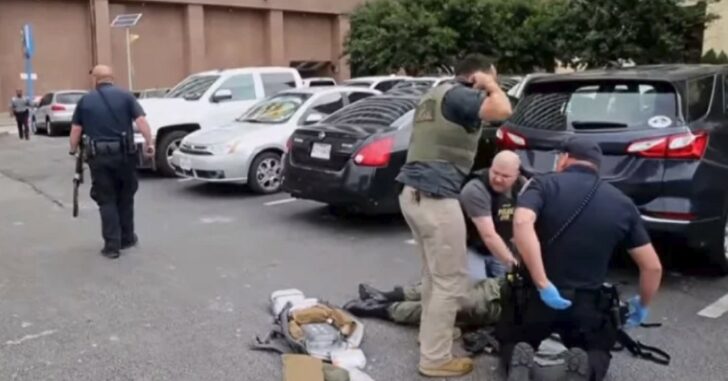 An attempted mass shooting took place today outside of a federal building in Dallas, Texas. The suspect, 22-year-old Brian Clyde, died after being shot by federal police who responded within seconds.

Brian Isaack Clyde was pronounced dead at a hospital following the shooting outside the Earle Cabell Federal Building. Clyde opened fire about 8:40 a.m., and law enforcement immediately responded, including three officers from the Federal Protective Service who were stationed at the building.

There were no injuries reported.

Clyde served in the army for about 2 years and was discharged. No other information regarding his military service was released.

For now, police have not released a motive as to what could have driven Clyde to attempt what he failed at.

Since the incident, Clyde has become an instant meme.

The photo so very prevalent in the meme collection above was taken by a news photographer. That photographer, Tom Fox, happened to be waiting outside to enter the building in order to cover a court case. As the would-be gunman was moving past him, he snapped the photo.

The memes and ridicule come after seeing the look on Clyde’s face in the photo, almost as if he had an “Oops, I f’ed up” moment of clarity.

Here is video from the scene, as the shooting was taking place:

And from above… In the video below, the person to the right of the gunman is the photographer who snapped the photo shown in the above memes:

Was it a cry for attention? We may never know, but it’s apparent that Clyde wasn’t prepared for what he set out to do.

A part of me feels sorry for him, not knowing why I’m actually feeling sorry. It could be the look, and a genuine feeling of “What have I done?”. That doesn’t change any facts, such as his carrying out of the plan. I’ll stop with the sympathy.

He did fire multiple shots at people, and was luckily a bad aim. There is no doubt that he was looking to cause damage.

Given his location of choice, one would think that armed personnel would be close by. Police were on-scene at the time. Multiple. They stopped the threat as quickly as possible, and did a damn fine job ensuring that no one could become a victim.

And that’s that. Good guys with guns are what stopped this man from killing anyone. That’s a job well done.