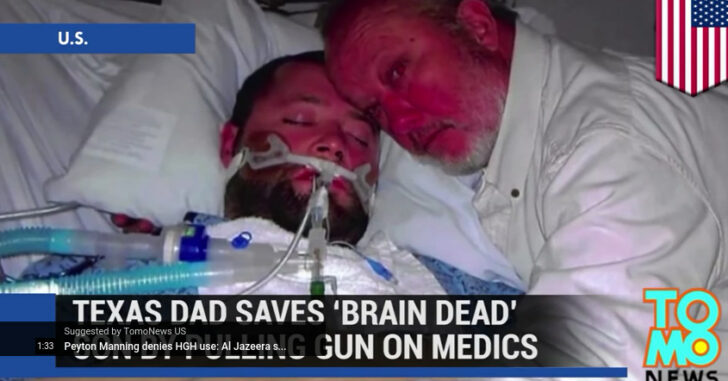 If ever a defensive gun use qualified as a Move of the Week, this is it. An armed father named George Pickering ignored a Houston hospital’s “gun free” zone signs and packed a pistol when visiting his comotose son. When docs at the Tomball Regional Medical Center declared his son brain dead and announced their intentions to pull the plug, the inebriated father drew his pistol on the medical staff. The cops responded. During a four-hour stand-off, his son showed signs of life. The Dad gave up and was arrested. The son recovered, though not fully (as stated in the video). The charges against Mr. Pickering were lessened and the penalty declared time served. I wonder if the same thing would’ve happened in New York? On any level.

**Editorial Note by Concealed Nation: We do not encourage or entertain a person being under the influence while handling / carrying a firearm, as it is an irresponsible act. However, this story is worth the debate that will hopefully follow in the comments below.

Previous article: Concealed Carrying Texans: Will You Start To Open Carry On January 1st? Next article: #DIGTHERIG - Dan and his Taurus PT140 G2