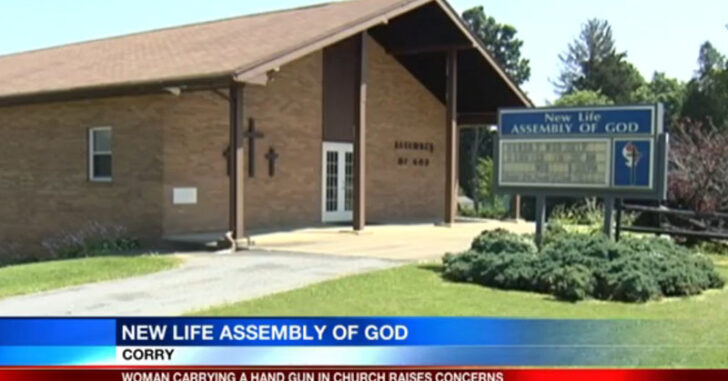 CORRY, PENNSYLVANIA — A woman unknown to the congregation at new life Assembly of God Church called police after they recognized a firearm on her hip.

Whether the firearm was exposed or simply printing is not clear, but whatever happened, it was enough to raise alarms from many.

Police responded and found the woman to be legally carrying her firearm. Police say they understand the concern, given the recent church shooting in South Carolina last month.

First, concealed means concealed. This is why I push for people to make sure they don’t print while carrying. Sure, you can argue that some people shouldn’t overreact in the first place if they do notice printing, but the fact is this: the Country isn’t there yet. There are still many people scared to death of people carrying firearms. If, for example, this was a printing issue, it wouldn’t have even occurred had the firearm been more discreet.

Second, I agree… people need to take a deep breath and calm down. Not everyone is out to do harm. We’re the good guys (and gals).

Previous article: Couple Awakens To Armed Man Crawling On Bedroom Floor, Then They Ruin His Plans By Opening Fire Next article: Do Tight Gun Laws Help Criminals? We Look At The Facts...