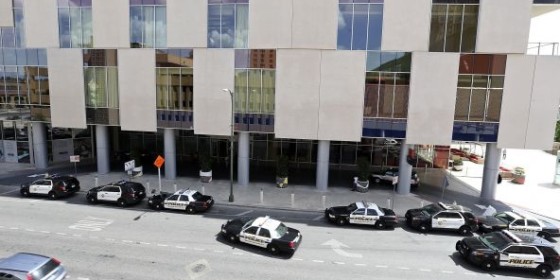 When we first reported on this incident, we did not have enough information to go on as to whether we could call it a self-defense shooting. We now have more information to make that determination.

According to My San Antonio, the man who was breaking lights in the hotel and confronted a guest, who in turn shot and killed him, had been suffering from a recent mental illness:

Witnesses and family members told police that Moises Torres, 34, had been “suffering from some un-diagnosed mental issues recently,” according to preliminary information released Monday.

Torres went to the sixth floor of the hotel at 1 p.m. and started breaking lights in the hallway, according to police. He started to bang on a door, and when a witness opened it, Torres said he was “looking for someone to kill,” police said.

After this, he went to another door where he met a man  and a woman. The man in the room had a concealed carry permit and was carrying a firearm at the time. He shot Torres in the chest after he was attempting to gain entry into the room, killing him.

No charges are expected to be filed against the permit holder.

According to My San Antonio, a hotel guest was fatally shot by another guest after an argument this Saturday afternoon.

The police chief stated that a man was breaking lights in the hallway of the hotel when he got into a verbal altercation with another guest.

The victim followed the man to his room, McManus said, where he knocked on the door until the man opened it. When he did, McManus said, the victim allegedly tried to barge in, and was met with a fatal gunshot to the chest.

Officer Douglas Greene wouldn’t offer any details identifying the shooter, but said the man had a concealed handgun license.

Although we don’t have all the details pertaining to this case, it seems that the man shot was the instigator and challenged the other man by trying to gain access to his hotel room. We will be keeping an eye on this story to see how it develops.

At this time, no charges have yet been filed against the man who fired the deadly shots. The department is looking into the case to see if it was a justifiable shooting.

Previous article: The 10 Best Concealed Carry Guns Next article: Why You Should Keep Your Carry Firearm Stock