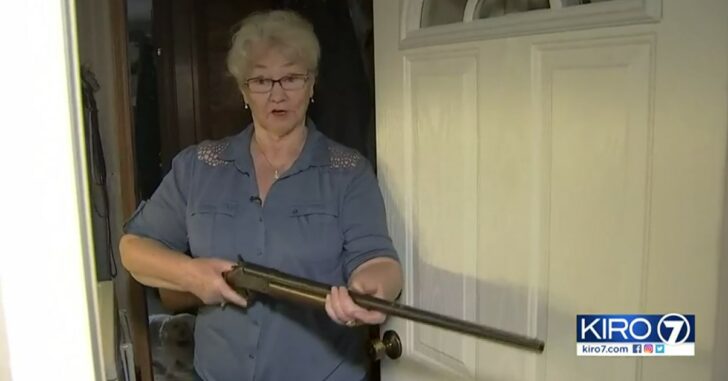 SPANAWAY, WASHINGTON — There isn’t much that’s better than an armed citizen being able to defend themselves when trouble comes to their door. This Grandma did just that, and she relied on her shotgun to help her get the job done.

The 78-year-old came face to face with an intruder, and she jumped into action.

Sandy said her neighborhood has been plagued by crime recently, resulting in her car being prowled twice. When she came face to face with the intruder, she wasn’t about to let him run away.

“I reached over and got my shotgun. And I cocked it, and I told him to stay right there,” she said. “Told him to go sit on the steps. I followed him out, and I just stood here with the shotgun waiting for the police to come.”

Years ago, Sandy says she got the shotgun to protect her family. When faced with a real threat, she says that she was scared at first, but then a sense of calm came over her.

“But then I was totally calm, really and truly. I thought, ‘This is amazing!’ I said, ‘You know, I’ve got grandchildren your age!’”

Sandy did a great job here, but I will critique one action that she took: She declined to press charges against the intruder.

After police arrived, they found that the suspect was not impaired and ‘did not seem distressed.’ And since Sandy didn’t want to press charges, police had no choice but to let the suspect go.

I understand that Sandy is in the line of thinking that this man had learned his lesson after having a gun pointed at him, and I truly hope that’s the case. Thousands of stories tell us otherwise, however, but we can only hope that this man is the exception.

One thing is almost certain; he won’t be coming back to Sandy’s house looking for an easy target.