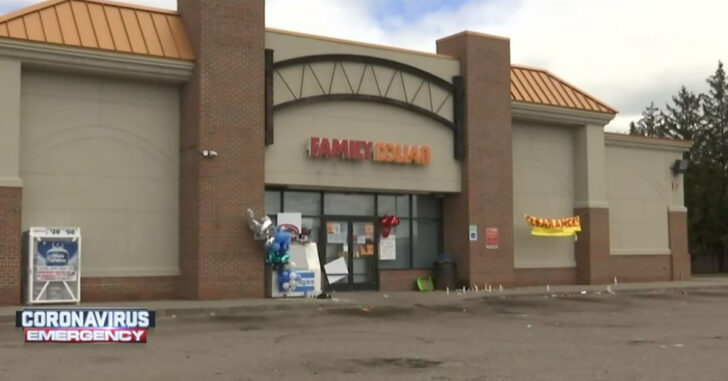 FLINT, MICHIGAN — A security guard at a Family Dollar store just outside of Flint, Michigan was shot and killed after telling a customer that they had to put a face mask on if they wanted to remain in the store.

The guard, 43-year-old Calvin Munerlyn, was simply doing his job after the Michigan Governor required the use of face masks while out in public.

Ramonyea Travon Bishop, 23, Larry Edward Teague, 44, and Sharmel Lashe Teague, 45, have been charged with first-degree premeditated murder, along with other charges, the Genesee County Prosecutor’s Office said in a statement on Monday.

What started as a request to wear a mask would quickly escalate to shots being fired.

“From all indications, Mr. Munerlyn was simply doing his job in upholding the Governor’s Executive Order related to the COVID-19 pandemic for the safety of store employees and customers,” Genesee County Prosecutor David Leyton said in the statement.

Munerlyn got into a verbal altercation with Sharmel Teague after telling Teague’s daughter she needed a mask, according to the prosecutor’s office. Surveillance video confirms the incident, Leyton said.

Sharmel Teague’s daughter left the store, but “Teague began yelling at Munerlyn who then told her to leave the store and instructed a cashier not to serve her,” the prosecutor’s office said.

Surveillance video shows them leaving in an SUV, but then returning 20 minutes later.

Two men walk into the store, identified as Larry Teague and Ramonyea Bishop. Teague began yelling at Munerlyn about being disrespectful to his wife, and that’s when police say his son, Bishop, pulled out a gun and shot Munerlyn.

Both men are being sought by police. Teague’s wife, Sharmel, was arrested.

The two men, at least one a felon, face multiple charges in connection with the incident, including possession of a firearm by a felon.

I wish this were a “guns saving lives” story, but sadly it’s a “felon taking life” story instead. These lifelong criminals will never obey the laws, will possess and carry guns when they aren’t legally allowed, and there is nothing that you can do to stop them.

Except being armed and prepared yourself.

Our thoughts go out to Munerlyn and his family, none of whom should be in this situation at the hands of an animal.

Let’s hope police are able to capture these two criminals and make them pay for their actions.