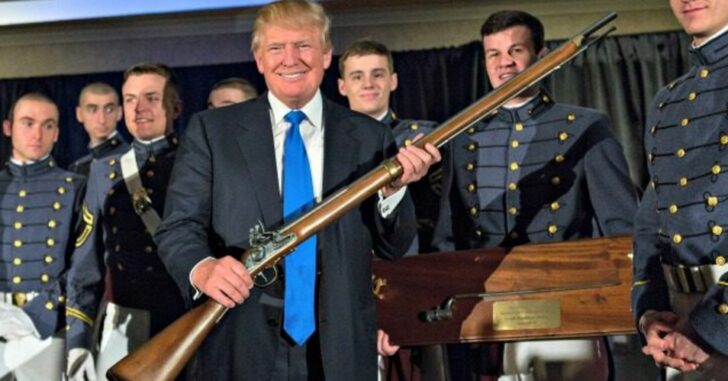 It comes as no surprise that President Elect Trump stands behind the 2nd Amendment, and it’s also no secret that Clinton would have passed more restricted gun control legislation. What though, does Trump have planned while in office?

Released on his website, Trump has outlined the route he wants to take in regards to the 2nd Amendment, personal protection and concealed carry. Let’s take a look at his points below, and leave a few comments to discuss:

There isn’t much to be said about his first point, except that he’s steadfast in protecting the 2A with his new-found power.

Having people on your side in the Supreme Court will go miles when 2A issues are at hand. Trump plans to see this through and create a group that supports and defends.

Instead of slapping the wrist of violent criminals, Trump plans to shut down early release and parole for these violent people.

To the points above, this project put violent criminals in front of a federal court in Richmond, VA and gave them a 5-year sentence with no early release or parole if they used a gun during their crime.

Here’s where it really speaks to the concealed carry community. To Trump, as well us, the ability to defend inside and outside of the home is crucial. Putting emphasis on concealed carry, Trump wants to make it better and easier for citizens to obtain their permits to carry a firearm.

In a Trump world, members of the military would be allowed to carry firearms on bases and recruiting centers, unlike now. We’ve seen bad things happen before, and it only makes sense to allow MEMBERS OF THE MILITARY to properly arm themselves while at home.

Another point of importance is the National right to carry, or National Reciprocity. This essentially says that if a person has a concealed carry permit in one state, that permit should be recognized in all other states across the Country. Just like a drivers license. Except, you know, a drivers license is a privilege while carrying a firearm is a right.

Fix, not expand, is what Trump proposes for the Federal Background Check system. Having the ability to communicate with records more efficiently will ensure a smoother process for all.

And finally, gun and magazine bans are out-of-this-world ridiculous. Being a New Yorker, Trump is well aware of the NY Safe Act which attempted to restrict magazine capacity to 7 rounds. That didn’t fly, but a 10-round limit was imposed and all magazines with a higher capacity were deemed illegal.

In Trump’s words, “Gun and magazine bans are a total failure. That’s been proven every time it’s been tried. Opponents of gun rights try to come up with scary sounding phrases like “assault weapons”, “military-style weapons” and “high capacity magazines” to confuse people. What they’re really talking about are popular semiautomatic rifles and standard magazines that are owned by tens of millions of Americans. Law-abiding people should be allowed to own the firearm of their choice. The government has no business dictating what types of firearms good, honest people are allowed to own.”

There isn’t any doubt that millions of Americans will fight these ideas but from where I’m sitting, they all look logical and sane.

With a now Republican-lead government, many of these ideas could become reality shortly after Trump takes office.

What’s your take? Do you agree with all of these points? Would you do anything differently?