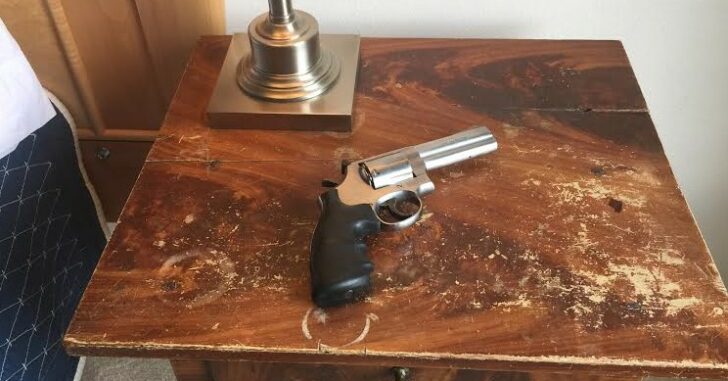 By Sara Tipton via The Truth About Guns

I own many guns. They’re all locked up. All except the one gun that’s on my hip. None of the guns in my safe are loaded – not that I find a problem with people locking up loaded guns. I simply don’t. I unload them all first and only put them back clean. But your self defense gun is just that: it’s for self defense. How are you going to be able to protect yourself if you lock up every single gun you own?  That’s why . . .

I carry all the time. All the time…well, OK, no. That’s a lie. I sleep and shower and I don’t shower with my gun (hello, rust) nor do I sleep with it on. During a shower, it goes on top of my medicine cabinet. It’s far enough out of reach that even if one of my kids unlock the bathroom door and get on the toilet, neither can reach the gun.

This is when I’m most vulnerable and when my EDC is the farthest from my hands. It’s also why I don’t take my time showering. I get in, get clean, get out, get dry, get armed.

I put on makeup armed. I dry my hair armed. I clean my house armed. When bedtime rolls around, and I finally remove the gun from my person again, it goes on my nightstand. But first, I remove the round from the chamber. Neither of my young kids are strong enough to chamber a round, and every other gun is locked up.

I do this even though I’ve taught my children gun safety, as an extra precaution. As my children get older (and stronger), I will reevaluate how I store my EDC overnight, depending on my faith in their gun safety knowledge and their mental state. But right now, I’m confident that I’ve balanced safety against intruders with the safety of my children.

I know there are fingertip bedside safes. But as a free American I consider myself free to decide not to use one. To decide how best to keep and bear arms to protect my family from criminals and their own curiosity. If I lived in Massachusetts or San Francisco, I’d be breaking the law.

San Francisco prohibits any person from keeping a handgun within a residence unless the handgun is stored in a locked container or disabled with a trigger lock unless the handgun is carried on the person.Unlike the laws of some other jurisdictions, San Francisco does not exempt a person who keeps his or her handgun within his or her immediate control from the requirements of the statute.

The law was upheld by both the district court and the Ninth Circuit Court of Appeals. In upholding the law, the Ninth Circuit recognized that unlike the District of Columbia law at issue in Heller v. District of Columbia, the San Francisco ordinance does not prohibit a person from carrying a loaded handgun while in his or her home. The Court also held that a safely stored gun can be accessed from a safe or enabled within a few seconds. The increased time it takes for a gun owner to access his or her gun is negligible, therefore, it does not place an impermissible burden on the Second Amendment rights of gun owners.

Note the language “unless the handgun is carried on the person”- meaning if you sleep with the gun on you, you’re on the right side of the law (and the wrong side of gun safety). I know the law was written to “protect the children,” but common sense and my experience with firearms says the law puts people – my family – at risk. So, like millions of Americans, I keep a gun by my bed, unsecured. Do you?